The Abbaye of Vaux de Cernay is about one hour south of Paris. We flew into Charles de Gaulle Airport and rented our car for the month, a little Audi A2. The drive to the Abbaye began at about 7:00 AM, so much of it was driving around Paris at rush hour, always an exciting journey but it passed quickly and without incident. Pictured below is the first leg of our trip:

Cernay was saved by the wife of Nathaniel Rothschild one of the financiers to the British Empire.

The simplicity of Cistercian design is apparent in the modest banding at the spring of the piers. The Abbaye was stolen from the Monks during the French Revolution. The property sold to be demolished by the State of France.

Inside the nave of the ruin of Cernay church, an early Cistercian design. Typical entry stairs down a half level from the entry grade. 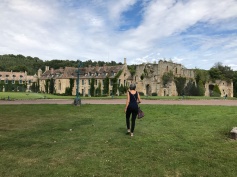 The Abbey had a mill at the damming of the river.

The fountain in the shape of a quatrefoil

Luz models our Audi A2